From the FOC to the HOC: Happy Ten Years!

Last Saturday marked the ten year anniversary of the House of Charity (HOC) in New Orleans, and we at the Future of Charity (FOC) blog want to celebrate their milestone.  We dedicate this post to our visionary sisters who dreamed up the HOC and have sustained it over a decade, impacting countless young adults, the city of New Orleans, and the Charity Federation – including, in a very special way, us who are newer members of our congregations.
The FOC has its roots at the House of Charity.  The same sisters who dreamed up the HOC also dreamed of connecting newer members across the Federation, and they eventually did, at the HOC in 2014.  Sisters Claire Regan, Mary Lex Smith, Monica Gundler, and Renee Rose welcomed us with open arms.  Our beloved, now-deceased Sr. Janet Gildea led us in reflection on the movie Field of Dreams. Its famous quote, “If you build it, they will come,” took on special power at the HOC, where more than a thousand guests have "come" since our sisters “built” it in 2010.  In this sacred space, Janet invited us to dream about collaborating for the Charity mission – and one idea that emerged was this blog, now more than five years running.
At the end of the weekend, another dear sister that we’ve since lost, Marie Flowers, gushed, “I finally feel like I have a ‘band’!”  For those of us who have entered our congregations with few peers, the FOC has been like our “band,” our entrance group, and the HOC has been our our gathering place, our home-base to which we return yearly.  This past November, we were blessed once again by the hospitality of the HOC’s current community, Sisters Monica Gundler, Peg Johnson, and Vicki Lichtenauer.  As always, we were nourished for the present and energized for our shared future.
We are so grateful.  And as a small token of our immense gratitude, we, the members of the FOC, offer tribute here to the amazing HOC:

©     In gratitude for being that place that holds the past of our Charity Charism and the love of our sisters who have laid down our foundation, the present of who we are in this defining moment, and the future that might be uncertain yet is laden with a promise of hope and guidance from God, happy 10th year anniversary, HOC! I am grateful for what you represent for us women of Charity!    ~Romina Sapinoso
©     The House of Charity is a wonderful example of collaboration among the Charity Federation congregations. It weaves hospitality, community, prayer, and service together for those who stay there.  Whether I am visiting with the Future of Charity or a college spring break service trip, I can feel the positive energy and hope that emerges from the group experience, impelling all to continue building the Kindom here on earth.    ~Rejane Cytacki
©     When I first stayed at the HOC in 2017, I had already been accepted as a pre-postulant with the Daughters of Charity and knew I would be living in New Orleans for my first year. Meeting and staying with the Sisters at the HOC for that first service week was a blessing, as I continued to be in contact with them throughout my time in NOLA. Being able to pray, serve, and be involved in their activities added a lot to my year.  Thank you, HOC, for your welcoming arms, hospitable spirit, and atmosphere of invitation to me!    ~Josephine Lomasney
©     My first time to the House of Charity was for Nuns Build 2013, and it was also my very first experience of the Charity Federation.  I will never forget entering the house to a bustling kitchen and two long tables full of Sisters talking, laughing and breaking bread together.  I immediately felt I was among family, and continue to feel that way every time I return to a warm welcome at the House of Charity.    ~Annie Klapheke
©     Every moment that I have encountered through gathering at the HOC has provided a source of growth, hope and faith in the journey as sisters of Charity.    ~Hyeon Lee
©     The first time that I went to the House of Charity for the Daughters of Charity Search and Serve in 2016, I instantly felt welcomed and loved. It was there that I first got to witness the Vincentian Charism in action. The sisters there have always been so generous and supportive of anyone who would walk through those doors, and for that I am very thankful. To this day every time I visit the House of Charity it still feels like home.    ~Carissa Kulpa
©     The House of Charity has been an integral part of my discernment/formation journey. I initially experienced their warm hospitality when I was first exploring a call to religious life, and since then I’ve returned numerous times as a sister-in-formation and even as a companion for other young women in discernment. The HOC is one of many "second homes" that I am privileged to have, and I'm so proud to be in the Charity family with the devoted and inspiring women who live and minister there.    ~Whitney Schieltz
©     The House of Charity has been a place where we as younger sisters can gather under one roof and one name, no distribution is needed. Great hospitality is always offered and a feeling of being at home is always felt. Thank you HOC for always being there for us as younger members in the federation. We are truly blessed.    ~Carlette Gentle
©     I’ve been lucky enough to participate in two Nuns Builds and be hosted annually for Future of Charity gatherings. My first Nuns Build, during novitiate, was an enlightening experience for me and the other Federation Sisters present. After spending the week together, they proclaimed that Tracy and I were “their” novices, too; we didn’t just belong to the Cincinnati SCs. That was the first time I really knew it was true that my community includes all my Federation Sisters. I’m so grateful to the HOC for facilitating those kinds of encounters and giving the whole Federation a place to call home.    ~Andrea Koverman
©     I am so grateful for the collaborative ministry of the House of Charity because it introduced me to the Sisters of Charity Federation.  This house offers a homey, welcoming atmosphere where sisters from across the Federation can gather to build relationships with each other and deepen our call to the charism of Charity.    ~Kara Davis
©     I first came to the HOC in 2012, shortly after deciding to take the plunge to become a Sister of Charity.  I was still full of questions and, truthfully, upset with God for asking me to “give up” other life options.  That week praying, serving, and playing with the HOC community was a turning point, reminding me why I was drawn to religious life and setting my heart afire with courage and joy.  Thank you, HOC, for your contagious witness to Charity!    ~Tracy Kemme
©     As we celebrate this HOC anniversary, I would like to pay tribute to the wonderful hospitality offered by the staff! I started attending Future of Charity gatherings there over 5 years ago to deepen my Federation relationships, and getting to know the Charity charism lived among us has been inspiring. The HOC has been a refuge to build support, relax, pray together as well as to have a lot of fun together. May God continue to abundantly bless the efforts of this ministry!    ~Judy Donohue

©     The HOC has always been a place of welcome and hospitality.  I treasure the opportunity to come together with newer members in different stages of formation to share our dreams and ideas, and to pray, play and support one another.  I am also gifted by the many mentors throughout the Charity Federation who walk with us and share in the journey of Religious Life with spirit of Charity.    ~Paris Slapikas

Happy 10 years, House of Charity!  We love you! 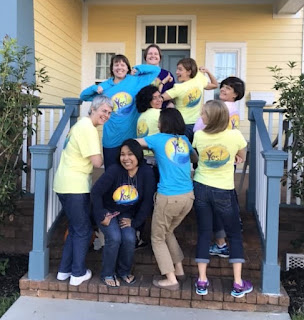 And we say YES with you to the next ten wonderful years (and beyond)...

P.S.  If you’ve never had the chance to visit the House of Charity, check out Sr. Monica’s video tour (which she offered as part of the Charity Federation's series of Elizabeth Seton reflections) by clicking right here!

Posted by Future of Charity at 8:43 PM No comments: