Jesus: A Man Exemplary to Other Men

Today is International Day for the Elimination of Violence against Women.  Since experience is the best teacher, I felt challenged in writing on this topic because I have not in my lifetime been victimized by violence against my person.

A great many perspectives are available from the internet that explain the causes of violence against women and propose solutions.  These include evaluations of gender inequalities and the way in which war increases the experience of rape among women and girls.  Such information also frequently addresses the effects of drug and alcohol abuse, as well as of mental illness, on the experience of violence among women and children in the home.

While eliminating violence against women should not simply be a matter of pointing the finger at men, it is nonetheless true that most domestic violence, as well as many crimes committed in wartime, are initiated by men against women, and often also against children in the care of women.

Although somewhat knowledgeable about the statistics, I cannot address the sociological perspectives mentioned above because I lack the expertise to do so.  What I can contribute, however, is my perspective on who Jesus Christ is, as a man exemplary to other men.  This perspective is valuable because where a man’s anger intersects with genuine conversion, the potency of inflicted suffering is not only managed and reduced, but nullified.

So what do we find in Jesus that might call out the conversion of men who harm women, and often enough by extension, also harm children?  Here are seven perspectives on that question that are supportable from the Scriptures:

Christ’s authority is founded in the confidence he has in the heavenly Father.  His confidence is expressed in humility, not pride; his goal is not to dominate, but to serve.
Have this mind among yourselves, which was in Christ Jesus, who, though he was in the form of God, did not count equality with God a thing to be grasped, but emptied himself, taking the form of a servant, being born in the likeness of men. (Ph 2:5-7)

The Lord’s anger is consistently directed at the strong; his compassion consistently toward those who suffer.
Then the Lord answered him, “You hypocrites! Does not each of you on the sabbath untie his ox or his ass from the manger, and lead it away to water it?  And ought not this woman, a daughter of Abraham whom Satan bound for eighteen years, be loosed from this bond on the sabbath day?” Lk 13:15-16 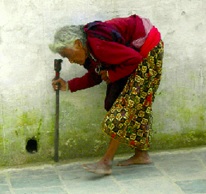 Jesus is firm, discrete, and precise in both judgement and mercy.
“Let anyone among you who is without sin be the first to throw a stone at her.”…But when they heard it, they went away, one by one, beginning with the eldest, and Jesus was left alone with the woman standing before him.  Jesus looked up and said to her, “Woman, where are they? Has no one condemned you?”  She said, “No one, Lord.” And Jesus said, “Neither do I condemn you; go, and do not sin again.” (Jn 8:9-11) 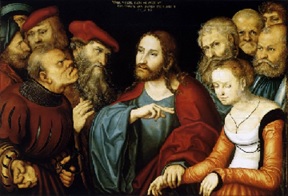 Jesus holds up children as exemplary of human trust and dependence on God; he holds up God, known by His beneficence, as the model of human fatherhood.
People were bringing little children to Jesus for him to place his hands on them, but the disciples rebuked them.  When Jesus saw this, he was indignant. He said to them, “Let the little children come to me, and do not hinder them, for the kingdom of God belongs to such as these.  Truly I tell you, anyone who will not receive the kingdom of God like a little child will never enter it.”  Mk 10:13-15
If you then, who are evil, know how to give good gifts to your children, how much more will your Father in heaven give good things to those who ask him!  Mt 7:11 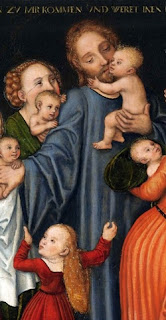 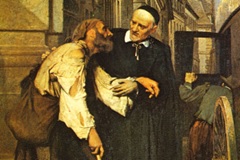 The Lord empathizes with women regarding trials unique to their gender, and he understands the effects of those trials on children.
Woe to those who are pregnant and to those who are nursing infants in those days!  Pray that your flight may not be in winter or on a sabbath.  For at that time there will be great suffering, such as has not been from the beginning of the world until now, no, and never will be.  Mt 24:19-21 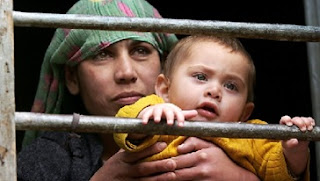 Jesus supports the freedom and intelligence of women to make decisions.
…the Lord answered her, ‘Martha, Martha, you are worried and distracted by many things; there is need of only one thing.  Mary has chosen the better part, which will not be taken away from her.’  Lk 10:41-42 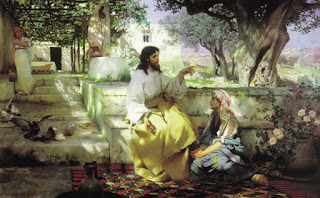 Posted by Future of Charity at 6:15 AM No comments: