Leaving It In God's Hands

Have you ever had those days, months or even year/s when you felt like nothing was going right no matter how hard you worked; trying to fix it all? Well I had one of those months recently. It seemed like everything around me was literally falling apart. I was frustrated but I tried to keep it together and keep things in control. I tried to handle it all but my “I can do this” power was running low. The car I use had to go to the mechanic because it was not working. One day turned into two days then, a week, then two weeks, then three. My laptop decided it needed a rest and gave me warning that the battery is about dead. The refrigerator and deep freeze at the convent both stopped working around the same time. The van that I use to transport my clients daily back and forth to their clinic appointments decided to quit on us and the mechanic told us it might take two to three months for the part to get to Belize if they ordered it. In addition to this, our community was planning our General Assembly in India and the visa that I applied for was late in coming and we only had about two weeks before we had to head to India and the visa had not come yet. I needed my visa in order to book my ticket. I tried to stay calm and in control but nothing seemed to be working out right. What made it worst, I was not sleeping at night worrying about what I could do to solve and fix any one of these problems. It finally got to the point where it seemed like I could no longer hold things together. I was tired, I was getting angry, my frustration was “off the wall” and I realized that maybe I am not the super woman I thought I was.

I decided to speak to one of our sisters about all that was happening in my life and, she listened intently and when I was finished she said, “Things are evolving, leave it up to God and get a good night’s sleep.” I thought to myself, evolving? “I need to get these things back to normal.” Anyway, I said, “thanks for the advice” and I tried to sleep that night. Well I could not sleep. I woke up at 4:30 that morning and sat on our porch. I watched as the sun rose while the cool morning breeze surrounded my body and caressed my face. I closed my eyes and savored the moment. After my prayer, I stood up, lifted my hands, raised my head to the sky and said, “Ok God I know I am not in control here. I leave it all up to you, I am letting go.” At that moment, the tension I felt behind my neck and head lifted. My shoulders loosened and it felt relaxed. I breathe in the fresh air of the Caribbean and felt God in the breeze. I could almost feel God saying, “Feel my presence I am here.” After my time with God, I felt like I was going to have a good day. I felt so comforted throughout the day, I thought to myself, “Carlette why do you always try to be in control when you know God is the one in control.” I went about the day saying, “I am not going to stress about anything, God is in control.” And, would you believe it, that day things started to fall into place. With the help of my community, the part for the van was ordered and a sister and her group was coming to Belize two days later so they brought the part needed. The appliance repairperson was able to come in on a weekend to repair both the refrigerator and deep freeze. I finally got a call saying that the car I used was actually ready. I received a call a couple days later saying that my visa arrived. The battery for my laptop was ordered and it was replaced. My ticket to India could be purchased because my visa arrived.

I continue to learn my lesson. Things may not always go my way as I plan them or even on my time. I continue to have faith and hope that God continues to make things evolve on God’s time, which may not necessarily be my time. World events today make me turn to God constantly because I feel helpless to address the needs of so many on every continent. I believe that I need to continue to do all I can to work with others to make a difference, and then go back to the porch and talk with God. I am learning that we cannot do it alone but, with God, all things are possible. I raised my hands to God and I said, “I got it, you are in control.” I continue to remember to do what I can and leave it all in God’s hands.
Posted by Future of Charity at 5:12 PM 1 comment:

A different kind of Fourth of July

Last Fourth of July was remarkable.  Since the Shariff family’s arrival in April, we’d been bonding with them over delicious Somali food and tea.  Now, we invited them for a cookout to celebrate their first “Independence Day” as Americans. 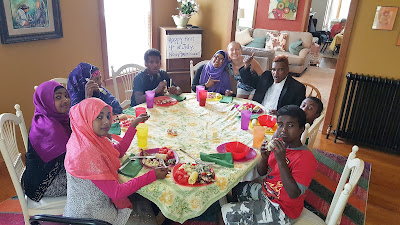 The Shariffs spent ten years in refugee camps in Ethiopia before gaining passage to the United States.  Their youngest son was born in a camp and knew nothing else throughout his earliest years.  In fact, it was his innocent, impassioned begging that convinced the UNHCR representatives to approve the Shariffs for resettlement.  The two parents and nine of their eleven children flew to Cincinnati to begin their new lives in the spring of 2017.  They carried painful memories and trauma, very little money, and worry about what the future would hold.  But they also carried their strong Muslim faith, the hope and resilience that had gotten them so far already, and their unbreakable family bond.

Thanks be to God, the Shariffs came into my life on their second day in the United States.  Catholic Charities initially struggled to find housing for eleven people, so the Sisters of Charity offered them a home until they could get on their feet.  From the first encounter with them as they climbed out of the white van, their belongings in grocery bags, I sensed that they were something special.

In the coming weeks, the Sisters and the Shariffs became family.  Our admiration and affection grew as we heard their stories and felt the warmth of their love and hospitality.  We delighted in watching them courageously dive into their new lives.  They wasted no time researching schools, jobs, drivers’ licenses, and more, their faces often brilliant with joy and determination even after all they’d been through.  When they found a house to rent, we kept in touch and visited. 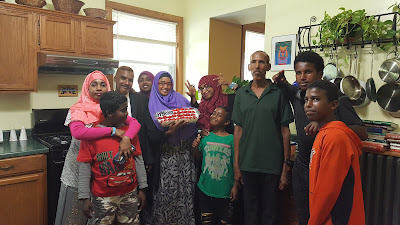 Then, on the Fourth of July, we drove three cars over to bring them back to our place.  They smiled brightly at our welcome sign written in Somali.  They tried our grilled halal chicken and veggies, potato salad, corn on the cob, and fresh watermelon.  We played games, and the girls gave us exquisite henna tattoos.  We finished the day with Annie’s lovely American flag cake and ice cream – a Shariff favorite.

It was the most meaningful Fourth of July of my life.  Celebrating our beloved new Americans was the perfect alternative to the militant false patriotism that tends to characterize this ambiguous holiday.  Our friendship with the Shariffs shows me the best of who we can be as a country and as a human family. 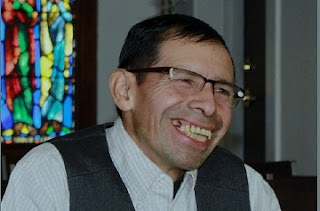 This year, the Fourth of July promises to be similarly profound but tinged in sadness.  Lazaro, a well-known and much-loved Holy Family parishioner, moves back to Guatemala on July fifth after eight years in Cincinnati, working sixteen-hour days at two cleaning jobs and leading the parish charismatic group.  The money he earned has supported his wife and five youngest children in his humble, hill-country town of San Miguel, and now, he says, it is time to return home to them.  He leaves his three oldest children here, and they’ve invited me to a farewell cookout on the Fourth.

Amalia, Lazaro’s oldest daughter, clutched my hand after Mass on Sunday.  We had blessed Lazaro at the close of the liturgy and now were gathered at a pizza party in his honor.  Her forlorn eyes misted as she whispered, “I don’t know when I will ever see him again.”

Amalia hasn’t seen her mother or five younger siblings since she migrated to the U.S. as a teenager, and this week, she effectively loses her father, too.  Our current immigration policy allows no path to citizenship for people like Lazaro or Amalia, and their undocumented status prevents them from visiting.

And so, instead of cheering our country on “Independence Day,” I will mourn its injustice.  I will sit in lawn chairs with Amalia and her two other siblings, sharing a meal of carne asada as they soak up their last afternoon with their Dad.  Then, at 4:30am on Thursday, I’ll pick them up and take them to the airport for Lazaro’s 7:00am flight.
Our laws have caused Lazaro and his family suffering.  As long as we put off comprehensive immigration reform, they will be divided.  But that seems to be of little concern to our nation who is now actively dividing parents from children at our borders.   All of this shows me the worst of who we can be as a country and a human family.

When Pope Francis addresses Congress in 2015, he said, “Let us remember the Golden Rule: ‘Do unto others as you would have them do unto you’ (Mt 7:12).  This Rule points us in a clear direction. Let us treat others with the same passion and compassion with which we want to be treated. Let us seek for others the same possibilities which we seek for ourselves. Let us help others to grow, as we would like to be helped ourselves. In a word, if we want security, let us give security; if we want life, let us give life; if we want opportunities, let us provide opportunities. The yardstick we use for others will be the yardstick which time will use for us."

The Pope's challenge could inspire us to a different kind of Fourth of July.  Rather than a day to reinforce a propaganda-laden image of the United States as the “greatest country in the world,” this could be a moment to pause and decide who we really want to be.  Rather than immaturely crying, “America first!” we could act for the common good.  Rather than independence, we could work toward interdependence.  Rather than simply admiring fireworks in the sky, we could ask God to enkindle a fire in our hearts to work toward the Kingdom. Rather than letting history unfold as it will, we could choose to celebrate what is good in our country and adamantly resist what is evil and unjust.

This is the question on my heart this Fourth of July: What kind of a country do you want to live in?  And what are you doing to make it that way?