Belonging To One Another 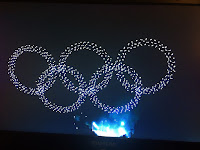 The Winter Olympics finished last Sunday and though I missed the closing, the opening ceremony was one of the best I’ve seen in years. The Olympics always excite me not just because we witness the incredible talents and gifts of individuals representing different countries. Neither is it special only because of the amazing stories behind the athletes who have worked their whole lives preparing for their chance to be on the biggest stage in sports. To me, it is remarkable because of the way it brings humanity together to celebrate everything that is good about us as a collective human race. It always makes me emotional when I see what a mosaic of wonder humans are when labels, tribes and country are set aside and all march together side by side in jubilation and peace.

Shortly after the opening ceremonies, I was at a rehab facility and the therapist engaged me in small talk. He expressed his disapproval of athletes who were raised and trained in one country and later go on to the Olympics to represent another. He said, “I guess they have dual citizenship or something. I don’t think that should be allowed.” I very casually mentioned to him that I was about to reclaim my Filipino citizenship after losing it last December when I became a naturalized U.S. citizen. He seemed a bit surprised by this unexpected revelation though we went on with our conversation about the games without any tension or trouble. This moved me
to reflect on how people in general identify countries, ancestry, languages, or “tribe” so to speak, as a primary and sometimes sole identifying aspect of who a person is, where and to whom they “should” belong. I do not mean to ignore, disregard or minimize in any way the richness of culture and diversity brought by different people. This should always be acknowledged and used to build just communities with one another. I simply mean to point out the complexity of people’s identities and how our attachment to labels keep us from realizing deeper truths about who we are.

A few days before my naturalization ceremony which officially switched over my citizenship, I remember thinking how weird it was that from one day to the next, I turned from Filipino to American. What does that mean? Does that fundamentally change who I am? The rest of my family, relatives and so many friends are Filipino. I’m the same person they know, born and raised in the Philippines. I will always speak Tagalog and Capampangan. Yet, America has also been my home for the last fifteen years. The friends I’ve met here, the work, school, church and congregational community members whom I’ve lived and ministered with also shaped who I am today. I use English more adeptly and I’ve added Spanish to my list of languages. What does it mean to be Filipino? Or American? Or does it matter in this case?

I carried this pondering with me to ministry where I spend two hours twice a week with the most
resilient students I’ve ever had in my life. I teach English as a Second Language at Catholic Charities to refugees from many parts of the world - Nepal, Bhutan, Syria, Dominican Republic, Guatemala,
Congo, Jordan, etc. We laugh and share with one another as we go through the immigrant experience and the struggles to learn English together. A month or so ago, I offered a ride to one of my Nepali students who was concerned about missing her daughter’s dismissal from school. The amount of time it took to ride three buses from Catholic Charities to her house would certainly get her home late but because I gave her a ride, she cut at least two hours from her travel time. She adamantly refused to let me leave without having a meal with her and her husband. I was so touched by her gesture and by the generous (and delicious!) Nepali feast I was privileged to share with them that I couldn’t help but keep pondering the question of who I belong to. Am I just Filipino? Am I just American? Do I not also belong to this wonderful Nepali family who blessed me with their company and their food on this holy ground that is their home?

Without question, there has been much polarization not just within people in the U.S. but everywhere around the world. In Europe, there is growing weariness and even hostility towards immigrants and refugees on top of tense attitudes towards minority groups already settled there. Among my own family members and friends in the Philippines, political divisions have ensued and “fake news” accusations fly around as freely as they do here in the States. It gives one a heavy heart to read opposing Facebook comments about gun control, the refugee crisis, immigration, taxes and government budgets. I cannot say how many times, I’ve seen a meme or have read a phrase to the effect of, “needing to help our own first or look after Americans before outsiders.” I have to ask, “Who is our own?” Holding my recent reflections and questions in my heart, I go back to Mother Teresa’s words, “If we have no peace, it is because we have forgotten that we belong to each other.”

Going back to the recent Olympics, my most favorite story was the end of the men’s freestyle cross-
country skiing. I was moved by it not because of the competitors who won the medals but because of those who finished last. The headline of the Washington Post read, “Thirty six minutes after the gold medal was won, the Olympics happened.” Mexican skier German Madrazo crossed the finish line as number 116, the very last place in the race. There, waiting for him standing shoulder to shoulder, were his friends and training partners - the other late finishers from countries where there was very little snow - a Tongan, a Moroccan, an Ecuadoran, a Portuguese, and a Colombian. Together they cheered on Madrazo, handed him his beloved Mexico's flag and carried him on their shoulders as soon as he crossed the finish line. Their joy in finishing the race, in the very last places, was just as overflowing and intense as that of the winners. Ultimately, they all knew they belonged to one another, regardless of the country they are from. They waited and cheered for the very last person, their friend who belonged to them, even if it meant staying long after everyone else has left. It was a triumph not just of one country but for of all.

Pardon the wild thoughts on this blog post that went all over the place. I will close with a couple of quotes that hopefully tie them all together. From the movie Black Panther, I quote the words spoken by T’Challa, the king of Wakanda to the assembly at the United Nations. “There is more that unites us than separates us. In a time of crisis, the wise build bridges and the foolish build barricades.” I also quote St. Paul from Galatians 3:28-29. “There is neither Jew nor Greek, there is neither slave nor free person, there is not male and female for you are all one in Christ Jesus.”

May we always remember to whom we belong!
Posted by Future of Charity at 3:00 AM